DRAWN TO THE DARK SIDE WITH CLAIRE C. HOLLAND

Hello Friends and Fiends--
Today in the Madhouse, I'm hanging out with Claire C. Holland and talking about what initially drew her to horror. Holland is a poet and writer from Philadelphia, currently living in Los Angeles. When she’s not writing, she can usually be found reading or binge-watching horror movies with her husband, Corey, and her Wheaten Terrier, Chief Brody. She is also a feminist, a tattoo lover, and interested in all forms of art strange and subversive.
I Am Not Your Final Girl is her first book of poetry, and for those looking to read more about her process and intention with the book, you can zip over to a previous interview I did with her here. Needless to say, I'm a huge fan of Holland's work, and she's definitely one of my go-to people when it comes to talking horror films, so be sure to check out her collection and follow her on Twitter at @ClaireCWrites.
More soon,
Stephanie M. Wytovich
Drawn to the Dark Side
by Claire C. Holland

I think horror was always a part of my identity, lurking somewhere deep in my bones, long before I ever realized it.
All things being relative, coming of age during the early aughts as a girl was no picnic. It’s only recently – in the last few months, really – that we’ve begun as a society to reckon with the unique brand of blatant misogyny imposed upon women, especially celebrities, during the first decade of the new millennium. Characterized by Perez Hilton, vicious tabloids, and stringent, sexist double standards, the early 2000s weren’t terribly different from the world we live in today; still, from the perspective of a post-MeToo America, it feels nonetheless shocking to look back on the cruelty piled upon women in the name of “entertainment.”

Forever a Britney fan, I watched the New York Times’ documentary Framing Britney last month with a box of tissues and my fists curled tight in anger. The documentary illustrates Britney Spears’ precipitous rise to ultra-fame as a teenager—what we’ll call the “Madonna” period, during which time she was asked invasive questions about her relationships and the status of her virginity, but was still considered a “good” girl—to her subsequent fall in the media, starting with her breakup with Justin Timberlake—the beginning of the “Britney is a slut” narrative adopted by most media outlets—and culminating in the night she shaved her head and threatened a paparazzo with an umbrella. That’s when people started calling her crazy, thus completing the usable lifecycle of a woman. 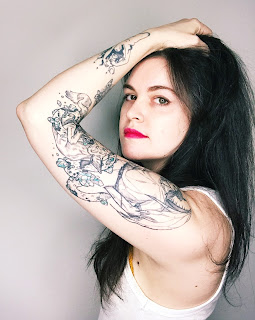 I promise I’m reaching a point.

That documentary brought up feelings I thought I’d long buried. Outrage and protectiveness, and also sadness for what could have been – not just for Britney, but for all of us girls. Where would we be, mentally and emotionally, if we weren’t raised by a savagely misogynistic society? I see the women around me thriving despite the world we were brought up in, a world of “catfights” and competition, a world where you could only be a Jessica (virgin, polite, smiles a lot) or a Christina (whore, ‘nough said), and you’re invisible by 30 anyway. A world we still live in, even if sexism is less barefaced.

But here’s a secret I’ve learned over the years: If you’re looking for an out, horror can be an escape route.

As a little kid, I delighted in watching Jaws and being the only one who wasn’t afraid or disgusted when Quint got bitten in half by the shark, spewing blood out of his mouth and gasping his last breaths. I felt brave, and it scratched a tomboy-esque itch of mine that, over the years, was otherwise mostly snuffed out by everything society was telling me I should be. Constantly praised for being “sweet” and quiet, and for never, ever causing a problem, I implicitly learned that I needed to be that way always.

But horror was always there, too, somewhere in the periphery, whispering in my ear and calling me over to the dark side. It started with the goth girls – Nancy from The Craft, Stokely in The Faculty, Ginger of Ginger Snaps. Oh, and Katie Holmes in Normal Behavior – that was a big one. These were the girls I secretly wanted to be or be friends with… or something. They scared and excited me with their belligerent, kohl-rimmed stares, their belly shirts and piercings, and their flagrant refusal to smile and make nice at the appropriate moments. They seemed self-assured and self-possessed in a way I could only dream of at the time. I couldn’t be them—how could I? it seemed impossible—but I could borrow pieces of them to bolster my own strength.

A smudge of dark eyeliner, or just a little bit of attitude. A skirt my mother wouldn’t approve of. Small things, maybe, but they gave me a small, secret confidence. They made me feel more like me.

I kept watching the movies and seeking out more like them. I quickly found that the women I related to weren’t on my TV screen very often, and they weren’t in most Oscar-winning movies. I began the slow, years-long process of realizing that all the complex, angry, sexy, twisted, multi-faceted women I saw myself in most weren’t in the mainstream, and more often than not, resided in the horror genre. These characters became a lifeline and a blueprint for me over the years, showing me the alternatives to living according to others’ expectations and inspiring me to misbehave.

Turns out they’ve always been there.
Posted by Stephanie M. Wytovich at 10:55 AM