Finding Your Door: The Importance of Queer Representation in the Wayward Children Series

Today in the Madhouse, I'm thrilled to welcome one of my favorite ladies, Cassie Daley, to help continue our Pride Showcase and celebrate the works of LGBTQ+ writers in the Speculative Fiction genre. Cassie is a wonderfully talented artist, writer, and photographer, and honestly, I'm not sure if there's anything that she can't do, but what I will say is that she consistently brings color and laughter and happiness into my life, and I feel honored to have her here today talking about one of our favorite book series: The Wayward Children by Seanan McGuire.

Like Cassie, I've always been a fan of portal world stories, and I spent a lot of my childhood running around the woods, digging holes in my backyard, and looking under my bed in an attempt to find a door to somewhere magical and haunting where I could go be my delightfully weird and morbid self without judgement. Stories like Neil Gaiman's Coraline were fast favorites for me, and I even have a tiny door in the corner of my office now to remind me that there's always that possibility of something more waiting behind the veil.

So grab your afternoon tea and pick some dandelions because it's time to sit back, relax, and enter a world of color, whimsy, and magic.

Yours between worlds,
Stephanie M. Wytovich

Finding Your Door: The Importance of Queer Representation in the Wayward Children Series
By Cassie Daley

Portal worlds have been a large staple of storytelling, especially in the fantasy genre, for longer than I’ve been alive - and for good reason! The adventure and possibilities that portal worlds bring to literature are unparalleled, often offering an escape for those of us who found more solace in our made-up story worlds than in real life. You’d think with the inclusion of aliens and mystical creatures and sometimes talking animals as characters, a cast diverse in more realistic ways wouldn’t be too much to ask for, right? Unfortunately, despite the seemingly endless available options for representation that these worlds and fantasy in general provides, our list of heroes in these stories is woefully monochromatic. More often than not, the protagonists--who we as readers are meant to look up to--are straight, white characters from privileged backgrounds who a majority of us have never been able to truly relate to. 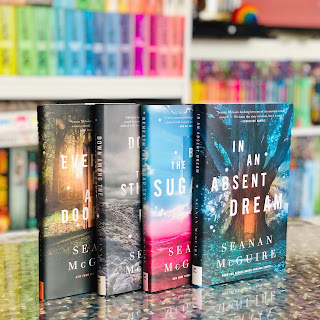 But then Seanan McGuire’s Wayward Children series hit the shelves, and instead of giving us cardboard characters throughout a truly wide cast, we’re introduced to so much representation in so few pages that it’s hard to question why this isn’t the norm.

For those unfamiliar with the books, McGuire’s Wayward Children series focuses on not just one of those portal worlds mentioned above, but rather unlimited numbers of them. These worlds are accessible only to children via special doorways that can take the form of anything from a specific mirror under direct moonlight, to a twisty old tree in the forest. The doors give only one instruction to those passing within them: Be sure.

In the series, some children are just born into the wrong worlds. Whether they are better suited to the quiet Halls of the Dead, or the mermaid-infested depths of The Trenches, or to hundreds of other possible worldscapes, occasionally, some children are able to find doorways that help get them to where they’re truly meant to be.

Unfortunately, sometimes certain things happened that cause these “lost” children to be found again and brought back to the place of their origin - or, as we know it, the real world. Understandably, this doesn’t bode very well for the children. The ones who struggle with coming back the most are sent to Miss Eleanor West’s Home for Wayward Children, where they’re given the one thing they haven’t been given by their families: the hope that someday they will be able to return to their true homes.


Some of the main themes in the series are individuality and the understanding that sometimes the roles we’re born into or that are expected from us, aren’t the roles we're going to thrive in. The children in Eleanor’s home all found other worlds where they grew as people, and sometimes even lived full lives – even if just a matter of months had passed here. Where these kids struggled under societal pressures and obligations in the real world, they were able to find freedom and truth in their portal lands, which allowed them to be their truest, most authentic selves.

Honestly, Seanan McGuire had a bestseller right off the bat with this premise. The ability to write about these different worlds and characters and make each of them so distinct and individual is a feat all its own, but then you get down to the nitty gritty of the actual themes and the representation, and that adds another layer of depth that just isn’t found in many books today, therefore putting it leagues above most other stories in the genre. 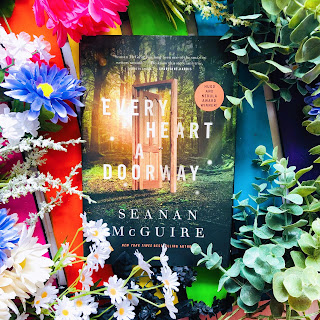 In the first book alone, our main protagonist is an asexual girl who struggles with her return from the dark, still Halls of the Dead, and her roommate is a tree climbing, colorful, energetic bisexual Japanese girl from a magical sugar land that exists in a state of constant, whimsical, nonsensical flux. Other characters include a trans boy who discovers himself during his time in his portal world, a fat girl who isn’t ostracized for her weight, and the list of great characters just keeps growing. Right away, we have characters who represent the people we know and interact with - and maybe even the people we ARE! - on a regular basis, but who we just don’t get to read much of in our literature. And how incredible is the normalization that, sometimes, we’re just born into the wrong place, situation, or even body? Especially as a series suitable for children, which is the age range when a lot of us first started to discover things about ourselves in respect to gender and sexuality - this is revolutionary!

McGuire herself writes: “Part of my goal with the Wayward Children series is providing representation for people who rarely get to see themselves in this sort of story. And yes, you can have queer rep in a series where characters start out between ages nine and thirteen. I knew I liked girls when I was eight. If this somehow made me “adult content” at eight, no one told me so. If Disney fairy tales are age-appropriate despite the forced heterosexuality, then a story about an eleven-year-old girl who has crushes on other girls isn’t overly or overtly sexual. It’s just a fact of life for many of us.” --via Twitter (Link for post: https://twitter.com/seananmcguire/status/1181641049053319170)

Now while we don’t have doorways to portal worlds in the real world (that I know of! Prove me wrong, Goblin Market, curfew be damned!), we do have books, which in my opinion are probably the closest things. We have the ability to be transported from the situations and lives we were born into, and sometimes we’re able to live out grand adventures, and even deep heartaches, between the pages the same way that these Wayward Children can and do. 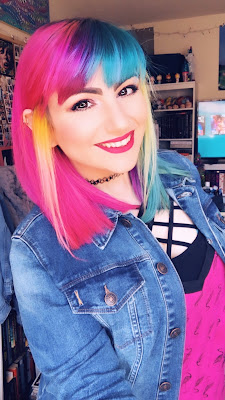 Furthermore as a woman who has been waiting her whole life for the pan rep in horror, sci-fi, and fantasy books that doesn’t quite exist yet - I am so appreciative of Seanan McGuire’s writing in this series, and of the stories being told. I urge more people to read this series, and to consider the importance of having an accurate reflection of our colorful society in the stories you choose.

And if you’re a writer, I implore you to normalize a wider variety of characterization in your own stories. Perhaps one day, one of your readers can find a Door of their very own within the pages of your books.

Cassie is an avid bookworm & overcaffeinated rainbow enthusiast. She creates artwork sold in her Etsy shop focused on color, horror, and pop culture. She writes about and reviews horror fiction on her blog, Let's Get Galactic, as well as for the Night Worms Blog.