BREAKING BONES IN THE MADHOUSE WITH PAUL MICHAEL ANDERSON 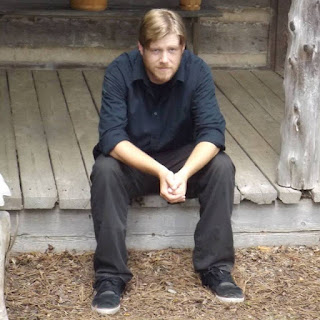 Today in asylum, I'm interviewing fellow Dark Regions Press author (and friend), Paul Michael Anderson. Paul's collection, BONES ARE MADE TO BE BROKEN, is coming out this October, and is currently part of the DRP Campaign that is running. If you're interested in supporting the campaign, you can preorder his book and grab a ton of other deliciously terrifying goodies, too. Click HERE to check it out and in the meantime, take a dip in the hydrotherapy tub and read up on our little chat between your ward comes back for you.

Don't worry.
It will be our little secret.

WYTOVICH: Tell us about your collection. What inspired you to compile it and how did you do so?
ANDERSON: I could be all author-ly and what have you but the truth is a lot simpler and a lot less (hopefully) pretentious: I wanted to do a collection because, partly, of Fountains of Wayne and because I couldn't remember my own goddamn bibliography.

I have a website, called The Nothing-Space (plug time! paulmichaelanderson.wordpress.com); it's a little blog-thing just to have a webspace with my name on it.  In any event, when I was getting the stuff all set up, I had to do my bib...and I couldn't remember all of it.  This sounds more impressive than it is.  I started publishing regularly in late-2010, with a smattering of things previously (like, literally, a smattering--like three pieces, I think) and I'd published, by this point, northwards of 20 and southwards of 30.  Not a lot, but enough that this story or that thing kept slipping my mind.  And it annoyed me.  I'm a bit anal-retentive about organization.

Related to this is that I'm a big fan of Fountains of Wayne, a pop-rock group most famous for their 2003 hit "Stacy's Mom", but had been around since the mid-1990s.  In 2005, they released an album of B-sides and demos called OUT OF STATE PLATES and, in the liner notes, the lead singer wrote, "We had to put all these things somewhere."

That attitude fueled the initial drive for the book, but I tucked the idea away into the back of my head until it became available.  BONES ARE MADE TO BE BROKEN doesn't collect ALL my stories--the really early stuff and a handful of other things--and it isn't chronological by any stretch of the imagination, but it has my favorite stories; the stories that either show what a "Paul Michael Anderson story" is (if, really, there is such a thing) or does something that surprised or entertained me.

WYOVICH: In regard to your writing process, what do you find is the hardest part? The most enjoyable?
ANDERSON: The hardest part is getting that first hump.  The second day of work.  Before I sit down, I have a what-if in my head--like, 95% of my ideas are situational and I just write myself out of whatever box I'm in--and a title.  These are the key and the lock and will get me to sit down and write that first night--between 1,500 and 2,000 words.

But it's the second night that's the hardest. I always try to leave at a good spot, but some first nights you just run out of gas, y'know? It doesn't happen AS MUCH anymore, but I used to have files littered everywhere of opening scenes that I love, but never went anywhere.

Anymore, I try to stack the deck as much in my favor as possible. I tend to think about stories as I fall asleep--my version of counting sheep, which doesn't say much for my work; thinking about upcoming scenes and dialogue and if I left any holes.  It keeps me jazzed for that idea.  Whenever I sit down. I always edit the last bit--an idea I got from Jack Ketchum and Craig Spector--to get myself back in the groove.  Usually those two things help, but until I start adding new words, it's a special kind of hell.

The best part is when I figure out what I'm talking about.  Like I said, I always start with a situation, but
that's not enough for me, right?  I need a little heart there.  One, it makes the more character seem more real to me; two, it can drive the narrative.  Once I have "real" characters, their flaws become apparent to me and, really, it's our flaws that drive a lot of our decisions.

But heart always give subtext; some abstract topic that I have in my head will come out.  In a story like "The Agonizing Guilt of Relief", I wanted to discuss those moments where there's nothing but helplessness, where every decision leads to another dead end.  How do you cope with that?  How do you answer that problem?  Once I nail that down--usually between first and second draft, but sometimes while initially writing--it's like I threw some nitrous in an engine.  It's fucking awesome.

WYTOVICH: How would you describe your writing style to those who are new to your work?
ANDERSON: Uh...I don't know?  "Horror" immediately pops to mind, but that brings with it connotations of ghoulies and ghosties and long-leggedly beasties.  Three of the stories are science-fiction sendups (albeit with an alien creature treated as god and another about a malfunctioning software); two are straight mainstream pieces ("Agonizing Guilt of Relief" and the title novella "Bones Are Made to be Broken").  I would describe them all as horror-ish.  Horror with heart sounds awful, but I wrote one story--"All That You Leave Behind"--with the direct purpose of using an awful situation to both horrify and reduce the reader to tears.

WYTOVICH: Besides your collection, what other books in the DRP campaign are you most looking forward to and why?
ANDERSON: Well, I've read a shit-ton of your poetry, so I'm looking forward to seeing your prose-work.  Getting out of the perks, it's more about specific writers and stories than the actual books.  I'd love to see the post-apocalypse stories in RETURN OF THE OLD ONES. Even though I'm in it, I want to see what other people wrote for YOU, HUMAN.  I always half-assedly write for a specific market--like I'll like a theme, but I never say/think, "Oh, I'm gonna be in that", even if I'm invited in.  So, I'm always curious to how I stack up against other people--am I in-line, or did I go deep off into left field (which is the case, I think, with my story in CHIRAL MAD 3, but the theme was loose enough that it still works and, anyway, Michael Bailey liked it).  I want to see Josh Malerman's piece, as well as Lucy A. Snyder's and John Skipp's.

AUTHOR BIO: Paul Michael Anderson's stories and articles have appeared in anthologies, magazines, websites, and podcasts.  He lives with his wife and daughter in northern Virginia. Follow him on Twitter @P_M_Anderson.
Posted by Stephanie M. Wytovich at 11:30 PM