THE MADHOUSE TURNS THE LIGHTS DOWN

The Madhouse lurks in the shadows this week, as we at Raw Dog Screaming Press are happy to announce that we've signed author/poet, Cynthia Pelayo, for her poetry collection, Poems of My Night. This collection is set to debut in mid-2016, and is a mixture of the dark and the haunted, the romantic and the imaginative.

Want more? Here's a interview that I did with Cynthia to give you a sneak peak into her process, her influences, and how Poems of My Night came to be. You can also find her on Twitter (@cinapelayo) and on her website: www.cinapelayo.com


1.      What is the title of your collection and how did you come up with the name?


The collection is called Poems of My Night. The collection is a response to a collection of poems by Argentine short story writer and poet Jorge Luis Borges called Poems of the Night. Borges was born in 1899 and died in 1986. He’s well known for his collection Ficciones, his literary criticisms, and his stories of mirrors, labyrinths, dreams and libraries. I took each of Borges’ poems in that collection, as well as beyond, and responded to each poem. I suppose it’s my one-sided conversation with Borges. Borges was fearful of reflections, his own especially. I suppose, in a way, this is me holding a mirror up to Borges who holds a mirror up to me.


My father. Chicago. Inner city life. Horror. Fear. Borges’ Poems of the Night deals with themes of death, blindness, darkness, and fear. Borges went blind in later life, and my father lost sight in one eye after a second stroke. I was terrified by the possible loss of my father, and each day I live with this fear that one day he will not be able to see me, because of his failing sight. Thinking back to Borges and mirrors, I’m believe I’m my father’s mirror in a sense, all children are. My father came to live in inner city Chicago in the 60s and this city it doesn’t just get under your skin it consumes you. I can’t shake this city away from me. It’s a horrible place sometimes, but I am who I am because of it. I can’t shake her from me.


I’ve been a published journalist since senior year in high school, so almost 20 years. I remember writing poetry then and my teachers being horrified over my poetry. One teacher, Mrs. Grinnage, took me aside and told me “This is very dark,” and it was her way of telling me not to do it anymore, and I stopped.  I felt like I had done something bad. Looking back, I don’t think she was upset with me, I think what I wrote just genuinely frightened her.


After a Bachelor of Arts in Journalism at Columbia College I worked as a journalist. Journalism pays you, but not so much with money. I pursued a Masters of Science in Marketing and entered the field of marketing research. I still wrote journalism, writing about inner city crime. After arriving to a highly charged scene, where the police had shot and killed a former gang banger I decided I couldn’t do it anymore. Maybe I got PTSD from it all, but I just couldn’t interview another homeless youth, or gang banger, or arrive to another scene where yet another kid was dead.


I still write articles, but they are more creative pieces. My main focus, in terms of my writing, is on my fiction and poetry.


My fiction and poetry has appeared in the Horror Zine, Danse Macabre, Seedpod Publishing, Flashes in the Dark, Blood Moon Rising, Micro Horror and more.


My novel, Santa Muerte, was published by Post Mortem Press in 2012 and the sequel is scheduled for a 2016 release.


I have a two-year-old so writing only happens when he is asleep. It’s difficult for me to write with noise in the background. I prefer it to be completely quiet. So I write either very early or very late. I outline, somewhat. My outlines are sparse and I tweak them as I go. I can finish a first draft fairly quickly but I edit quite a bit, going though several versions before I’m happy with a project to submit.


7.      What are you most excited about with this collection in particular, i.e. what was shocking or surprisingly to you while you were writing it?


Of all that I have written this is the most personal. I didn’t intend it to be, but that just happened. In this work you will find me, you will find my father and mother and their history, you will find the despair of this city, and some of it’s black history as well. Of course you’ll find gaunt-faced ghosts, the devil and death. I’ve spent many nights sitting outside in this city, looking at people, watching and wondering who they are and what are their stories. There is good here, and wonder and beauty, but this can be a difficult place to live. I’m lulled to sleep at night by shouts and sirens, cries and gunshots. This is my inner city home however, this wonderful and sometimes terrifying place full of good and evil.
Author Bio: 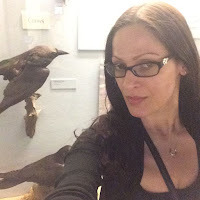 Cynthia (cina) Pelayo’s first novel Santa Muerte (Post Mortem Press, 2012) is an International Latino Book Award winner in the category of Young Adult Fiction. The sequel, Santa Muerte: The Missing, will be released in 2016. Pelayo is also the owner and publisher of Burial Day Books. Her short stories have appeared in The Horror Zine, Danse Macabre, MicroHorror, Seedpod Publishing, Static Movement, Flashes in the Dark, among other publications. Her nonfiction work has appeared in Gozamos, Time Out, Extra Bilingual News, Venus Zine, FNews, Atlas Obscura, and The Richest. She lives in Chicago with her husband and her son.