The Revelation Behind the Poppet Cycle: A Guest Post from Donna J.W. Munro

Today in the Madhouse, I'm thrilled to be sharing space with author, Donna J. W. Munro. Donna and I go way back as we both went through the same MFA program at Seton Hill University, and in addition to being one of the kindest, most welcoming and sweet people I know, she's also dangerously brilliant and creative and one of the hardest workers in the business.

I've learned a lot from her.

Below is a post that Donna put together about her recent release from Omnium Gatherum: Revelation, Poppet Cycle Book 1. I hope you enjoy it and that you'll take some time to check out her book and everything else that the press has to offer.

About ten years ago, I was talking about the limits of horror with one of my writing mentors, Mike Arnzen and he said, “A zombie romance... that’s the limit.” I took that as a challenge.

This isn’t a zombie romance.

It is a story about loving zombies.

I’ve been playing with the idea that grew into my dark, dystopia world for about ten years now. What if we could end all the terrible things that we do to each other by creating a class that we didn’t have to worry about hurting? Something not human. I should also say that I’m a history teacher, so I know that this idea isn’t new. There have always been people we’ve used as scapegoats or slaves or an underclass. One of the many things that terrified me about the American antebellum period in the south was that wealthy white children were often raised by enslaved women who acted as better mother figures than their own distant mothers. They loved these women and played with their children like they were siblings. But at some point in their maturation, they were expected to stop loving those people and suddenly think of them as property.

What a brainwashing, horrific society that was. The enslaved were absolutely robbed of their lives and freedoms by people they’d raised, while those owners broke the deepest connections they’d formed in their youths.

The last element of this book came from my reading of some formative books that need some reimagining. Uncle Tom’s Cabin and The Adventures of Huckleberry Finn both examine the relationships between African American men with no power and the relationships they have with the white people in their lives. Both books frustrated me for so many reasons, but the willful downplay of the agency of the African American character and their humanity felt like just another example of this disconnect between the love between the characters and the disregard of their mistreatment.

So, my poppets were born.

Let me be clear. They aren’t African American. Poppets are the dead who have been raised to fill the roles and jobs that we distain or look down on. Servants, laborers, prostitutes. Why not? Poppets are just meat machines, revived and chipped, brain dead and without feeling.

I really wanted to write the story of a privileged girl forced to deprogram herself because she couldn’t stop loving the poppet who’d raised her. I wanted her to be the perspective and I wanted her poppet, Thom, to be the hero.

I hope that’s what I’ve managed to do.

“This stark, yet richly layered narrative, the first in Munro’s anticipated Poppet Cycle series, is a study of privilege, persecution, and the power of love. A chillingly perceptive dystopia cementing Munro as an author of note, Revelation is a novel worthy of its title.” — Lee Murray, three-time Bram Stoker Award nominee and author of Into the Ashes

The questions about the poppets - are they property or slaves? Do they have souls? - are ones the main character grabbles with throughout the book. This story also reminded me of Unwind by Neal Shusterman. Same creepy vibe, but completely different story. -Maria V. Snyder, New York Times bestselling author of the Sentinels of the Galaxy series.

Donna J. W. Munro is an explosive talent on the genre scene, and here she emerges with a surprisingly touching dark science-fiction YA novel set in a completely original dystopian world. She has crafted an amazing, original take on the zombie -- the “poppet” worker -- and a reimagined future world in a tale that is about so much more than just the living dead. It is a story of love, courage and liberation. And like the most inventive social stories of Ray Bradbury and the epic coming-of-age narratives of Stephen King, Munro’s novel will leave an indelible memory in your brain, and awaken you to the power of genre storytelling. Revelation launches an excellent new cycle that readers young and old alike will adore! -- Michael Arnzen, author of Grave Markings 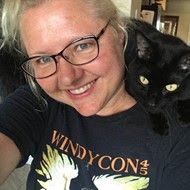 In a dark future, people harvest the dead to use as servants called poppets. 16 year-old Ellie must choose between a life of wealth and greatness or her love for her poppet, Thom. A boy from the wilds shows her that her family’s business trading in poppets isn’t as innocent as she was taught. Her choice will change the world.

Posted by Stephanie M. Wytovich at 9:56 AM