Planets, Poetry, and the Solitary Wanderer: A Guest Post by Albert Wendland

Today in the Madhouse, I'm honored to host Dr. Albert Wendland, who I had the pleasure of studying with at Seton Hill University both for my undergraduate and graduate degree. When I was first starting out in college, Dr. Wendland's classes truly helped shape me as a writer, and taking some of his literature classes--whether they were centered around British Lit or theoretical approaches to the sublime--helped teach me about art and philosophy in a way that I had never been exposed to.

Later on during my graduate work, I studied science fiction with him for a little bit, and in addition to turning me on to classic works like Frank Herbert's Dune, he's also responsible for assigning me my first ever graphic novel (Planetary), which opened up a whole new world to me, and I'm happy to say that I'm an avid comic book/graphic novel reader now, largely due to him.

As such, t's a true pleasure for me to have him here on my blog today where we're discussing his upcoming poetry collection, Temporary Planets for Transitory Days. If you'd like to read the formal announcement of this book deal, you can click here, and as always, you can follow Raw Dog Screaming Press for more updates and announcements surrounding its production.

Until then, sit back, relax, and get lost in the stars.

The protagonist of my two science-fiction novels, The Man Who Loved Alien Landscapes and In a Suspect Universe, is an interstellar explorer/adventurer living in a galaxy where travel between the stars has become common. He’s a solitary person, and one of the challenges I had writing about him is that he is so private he seldom reveals himself.

How do you talk about your character when he doesn’t want to talk much to others, or to you?

(Or, as the fictional editor of my current book laments, “Mykol Ranglen, who are you?”)

Yet Mykol Ranglen has deep feelings, and deeper longings. His relationships with people are intense though often fragmentary—as if he runs away before “letting anyone in” (at least that’s what one of his ex-lovers said about him). Unsure and overly careful, often paranoid, he escapes from people to other planets, where he can explore and be on his own and experience different forms of life and behavior. After staying for a while on his home world of Annulus (a large circular habitat in space), he either leaves for a private retreat inside an asteroid, or travels outward into unknown spaces, eager for the new, the peculiar, the sublime. 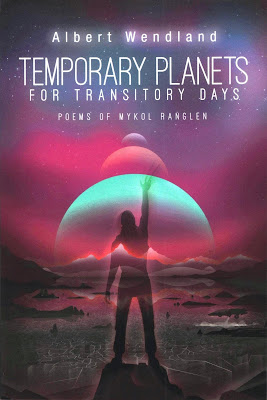 He really is a “man who loves alien landscapes.”

But he’s also a writer.  And besides his essays and travelogues he often writes poetry. He has a reputation as a recognized poet, but his shared writings are never revealing of his private life. Yet, however, he does keep one ragged notebook of private jottings that he keeps to himself (it was introduced, and at times quoted, in the second novel, In a Suspect Universe). And, while I was writing that novel, I cherished the idea of also writing and publishing that notebook—a collection of his private poems, the ones he doesn’t share, the ones in which he reveals (if in devious and not always forthright ways) his feelings, his experiences, his reactions, his thoughts, and especially his longings.

This notion captivated me when I thought of it. I gathered all the poems I ever wrote and I then edited, elaborated, and doctored them for Ranglen’s exclusive voice. Then I wrote a whole host of original works, more than half the book, on subjects I imagined Ranglen pondering and that I often toyed with myself but normally would not have composed (like a long celebration of spaceports—one of my favorites). Then more poems and titles came—“Litanies of Worlds,” “The Universe In a Frame,” “The Secrets of Earth,” “A World Called Little Redemption,” “Crashing Suns,” “Conversation in a Darkened Spaceship.” I was on a roll!

Some poems would be frank personal revelations:

Now you are lost,
Found and gone,
To return in only
The small dreams of night . . .

Others would hint of planetary, galactic, or near-mythic pasts:

In the old Dreamtime,
When the world was unformed,
The Sky Heroes walked
The fluid first lands . . .

Some would give clues to Ranglen’s more secret and ongoing tales:

Though other stories end,
Your “Deep Story” thrives,
A suspended revelation
Told in Galaxy Time . . .

Others would elaborate specific incidents from his past, about the people and places that haunt him:

Last night I dreamt of the Spiral Palms,
And the joy and wonder of that lost time
Welled up inside me like an ocean at night . . .

Some would describe the wonders he’s seen during his many travels in space:

And all of them would show his dreams and his hopes, his many fears, and especially the ache of his persistent yearning,

The secret of identity
That to our window night brings:
Our longing is blind,
But our longing has wings. 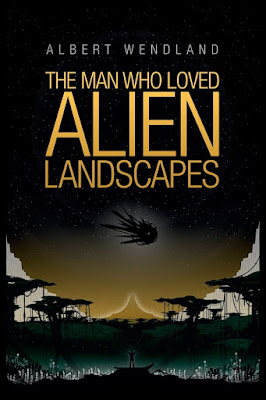 So, I hope you can sense the pleasure I felt in writing this collection, and the fine sense of accomplishment it brings. It helped me to respect the secrecy of my main character, and yet, at the same time, it allowed me to get into his soul—to let him have his say, and yet to do it through his own poetic and personal means, to hear him describe what he apparently lives for most:
Sites passed,
Travelers’ ways,
Temporary planets for transitory days.

(The book can be pre-ordered here, and all early orders get a special gift insert linking a poem with an incident in one of the earlier novels.)

Bio: Albert Wendland has made a career out of his life-long interests in science fiction—and photography, art, film, and travel. He teaches popular fiction, literature, and writing at Seton Hill University, where he has been director of its MFA in Writing Popular Fiction (the program famous for its exclusive attention to genre writing). His SF novel, The Man Who Loved Alien Landscapes, was a starred pick-of-the-week by Publisher’s Weekly, and the prequel, In a Suspect Universe, was published in 2018, describing a story from the protagonist’s past. He’s also written and published a book-length study of science fiction, a chapter in Many Genres, One Craft, a poem in Drawn to Marvel: Poems from the Comic Books, and several articles on SF and writing. He enjoys landscape photography, astronomy, graphic novels, and the “sublime.”