FINAL GIRLS IN THE MADHOUSE: AN INTERVIEW WITH CLAIRE C. HOLLAND

Today in the Madhouse, I'm hosting Claire C. Holland. Holland is a poet and writer from Philadelphia, currently living in Los Angeles. She has been a freelance writer for more than ten years, and her first book of poetry, I Am Not Your Final Girl, is available now. When she's not writing, Claire can usually be found reading or binge-watching horror movies with her husband, Corey, and Wheaten Terrier, Chief Brody. She is also a feminist, a tattoo collector, and interested in all forms of art strange and subversive.

I had heard about Holland's work at StokerCon this year when I was presenting a feminist lecture on Scream Queens: The Role of Women in Slasher Films. Several people asked me if I had read her work yet, so needless to say, I was so excited that I immediately downloaded in on my Kindle and read it on the flight home. I became a quick fan of Holland's work, because not only is she a fantastic poet, but her work is also empowering and it tackles a lot issues that we're all facing today, both emotionally and politically.

I'm beyond excited to have her here in the Madhouse with me, and I hope you'll all give her a warm welcome, check out her work, and enjoy the interview that we did below.

Tell us about your book. What gave you the idea to create this collection, and in your opinion, what does it represent at its most literal and figurative heights? 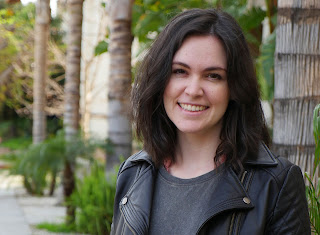 I think I started writing the book about a week after Donald Trump won the U.S. presidential election. I was feeling incredibly depressed, hopeless, and scared - but also so angry. Angry that we had, in my opinion, failed one another as fellow citizens. I was angry at myself for not doing more before the election, and for assuming that the rest of the country would “obviously” not vote for a misogynist, racist reality TV show star. I needed to channel those feelings, and I deal with intense emotions by writing about them. I was already working on a YA novel in verse at the time, and originally, each section opened with a poem from the perspective of a final girl from horror film (the girl who survives until the end). I ended up simply expanding on that idea and running with it, and the poems practically burst out of me.

The book is about the interior thoughts of these fictional women, who I used to channel my own frustrations and fears about today’s world. It’s also about finding your inner strength, or even your inner monster - that extra bit of fight that I think every woman has inside her, that a lot of us are just discovering. I hope it resonates in that way for other people, too.

The collection is broken down by movies and then given female names as titles. How did you decide to organize the collection this way? Did you have the movies already picked out, or did you write to different movies as you worked through the book?

As I said above, I had already written three “final girl” poems for a different project I was working on, and that’s what gave me the idea. I’m obsessed with horror movies, so I already had a huge knowledge base and I immediately had a lot of characters in mind. Carrie White, Laurie Strode, Sally Hardesty - they’re staples of the horror genre and classic examples of the strong, smart final girl trope. As I kept writing, though, I had to mine a ton of movies for inspiration to finish the book. A scene or moment would eventually spark a line or an idea. I named each poem after the character because I wanted to feel like I was giving these women a renewed voice.

What is your favorite slasher film and how do you personally define Final Girl?

When Carol J. Clover coined the term, it just meant “the woman who survives until the end.” She was generally girl-next-door-ish, likable, bookish. Brunette. I think the term has broadened in recent years, at least in terms of what a final girl looks and acts like. In my book, there are several characters who don’t match the traditional description; I even have a few villains in there. I didn’t want to constrict myself to a completely classic view of the final girl, because I think our society is finally beginning to recognize that women can be antiheroes, too, and we’re allowed to root for them. I’ve sometimes been most inspired by “monstrous” female characters, because they’re really just smart and ambitious.

Asking me to name my favorite horror film is like asking me to name a favorite puppy… but my answer for the last few years has been Evil Dead - the 2013 reboot. I hope I don’t lose all my horror cred for naming a remake, but I love it. Green Room might be a close second at the moment.

You work is so empowering when it comes to slashing the tropes and stereotypes that women are usually cast in. I’m curious, what would you like to see change in the industry in regard to the roles women play both in horror fiction and film?

Thank you! I actually think horror is one of the most progressive, satisfying genres for a woman to be interested in right now. We have incredible new horror films coming out every other month, and so many of them are being created by women, from a woman’s perspective, dealing with women’s issues. Karyn Kusama, Julia Ducournau, Ana Lily Amirpour, Jennifer Kent - they’re all making movies about motherhood, grief, assault, growing up female. But they’re doing it through a very universal lens, which is what I love about horror. Anyone can identify with fear. So I think we are seeing a big change in the way women are being portrayed in the genre, because women are writing those characters. But I think race is an area that hasn’t been addressed nearly as well by the genre as a whole, so I’m excited to see a movie like “Get Out” getting so much attention. I hope we see more of that.

As for horror fiction, I’m going to have to out myself as a huge wimp right now and say that I read almost no horror, aside from young adult or poetry. I don’t know why, but a scary book is leagues more frightening to me than a scary movie.

What takeaway do you hope your readers leave your collection with?

At the very least, I hope it helps some women feel less alone. We’re all struggling through this scary time, and experiencing many of the same feelings. We’ve all been through things and made it out alive. I hope it empowers women to embrace their own strength.

How did you come to poetry and who are some of your influences?

I’ve written poetry for as long as I can remember. My mom read a ton of books to me as a child, including plenty of poetry, and I just loved the detail in it. You can write a whole poem about the beauty of someone’s fingernail, if you’re good enough. My biggest influence when I was younger was Francesca Lia Block - she writes the most gorgeous prose, it’s like poetry. I had a college professor, Jehanne Dubrow, who writes beautiful poetry and I feel like she taught me so much. Beth Bachmann is a poet I aspire to be more like; her poems cut straight to the bone.

Can you give us an insight into your writing process? Any habits or rituals when you sit down to write?

Well for this book, if an idea wasn’t already brimming right at the surface, I would usually put on a horror movie and watch it in the dark for a while to get in the right mood. Other than that, though, I wouldn’t say I have much of a routine. I just like to be quiet and alone when I write. I wish I wrote in a leather-bound journal or something cool like that, but I always write straight on my laptop when I can so I can see what the poem will look like on the page.

Janet Fitch is a favorite author of mine, and her newest book, The Revolution of Marina M., is actually about a poet, so I’ll be checking that out. Nova Ren Suma has a new book coming out soon that I’m excited about, A Room Away From the Wolves. I just read After the Witch Hunt by Megan Falley and really enjoyed it.

I’m not sure, to be honest. I’m encouraged by all the positive feedback I’ve gotten so far, and I do have an idea for another poetry collection kicking around in my head. I’m just going to keep writing and see where it leads me. If Trump is president for much longer, I may end up writing a trilogy!

What advice do you have for poets working in the horror genre? 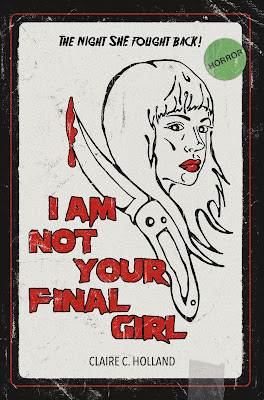 I think participating in an online community of like-minded people can really help, both in connecting to an audience and getting the word out about what you’re making. It may sound strange, because Twitter is often known for being a toxic environment, but I got so much support from other horror film fans on Twitter while I was writing this book. Many of them preordered it or bought it the day it was released, it and then posted about it on social media themselves. It was amazing. I think it’s difficult to find your audience as a poet, because the majority of people still tend to think of poetry as an old-fashioned kind of writing that isn’t relevant today. But I think if you can connect to an audience on multiple levels, it shows people that poetry can be just as accessible and relevant as any other art form.

Book summary:
"... a timely collection of poetry that follows the final girl of slasher cinema - the girl who survives until the end - on a journey of retribution and reclamation. From the white picket fences of 1970s Haddonfield to the apocalyptic end of the world, Holland confronts the role of women in relation to subjects including feminism, violence, motherhood, sexuality, and assault in the world of Trump and the MeToo movement. Each poem centers on a fictional character from horror cinema, and explores the many ways in which women find empowerment through their own perceived monstrousness."