There's a fistfight in the madhouse!

The Madhouse is in the boxing ring this week, as we at Raw Dog Screaming Press are happy to announce that we've signed author/poet, Matt Betts, for his poetry collection, Underwater Fistfight. This collection is set to debut in early 2016 and is a mixture of SF, Fantasy, and Horror. It will tug on the [bizarre] heart strings of monster fans and siren hunters alike, so if you're up for a battle of oceanic wit served with some tidal waves of dark humor, then this is a collection not to be missed!

Want more? Here's a interview that I did with Matt to give you a sneak peak into this process, his influences, and how Underwater Fistfight came to be.

1.      What is the title of your collection and how did you come up with the name?


The new collection is called Underwater Fistfight. I’d really loved that title for a long time for some reason, but could never write quite the right piece for it. I’d always intended it to become a metaphor for the struggle to create poetry. A poem to illustrate the difficulty in creating viable art, but I couldn’t make it work? Imagine! Early on, I tried to conjure the images of the undersea battle in the James Bond film Thunderball, and the strange battle between the undead and a shark in the movie Zombi 2.There were spear guns, bubbles, fish. Kelp? There may have been kelp. Just couldn’t make it as fun as I saw it all in my mind. So it ended up as a pseudo-educational introduction to the collection as well as the title.


I’m a pop culture junkie and I’ve always loved science fiction, fantasy and horror. Underwater Fistfight is kind of my thank you to all those amazing directors, actors, writers and creators that made such amazing films as the original Godzilla, The Blob, Them! and others. Growing up, it was a labor to get to watch them. Way back then, with no cable or internet TV, we had to rely on whatever the TV antenna would pick up. There were maybe three channels we could get normally, but if we adjusted the antenna just right, we could pick up channels out of Detroit, Ft. Wayne, Dayton and Columbus. Of course, they could still turn blurry and fade out, turning snowy at the worst possible times. Certain stations had a monster feature on weekends and that was the only way for me to see so many of those old movies. I have fond memories of that struggle to find the odd and the unusual, and they show up in my work.


I’ve been writing poetry for about 12 years or so. I took a few classes way back in college, but I didn’t really receive the encouragement I needed at that point. I was trying to branch out from what we were learning in class and the professor was not really interested in the forms or subject matter that made me interested in poetry, namely horror and sci-fi. Believe me, I know at that point I wasn’t writing any classics, but I enjoyed stretching beyond what was handed to us in class. When we did critique sessions, I remember getting a good reaction from the other students to what I was doing, but I just couldn’t get the professor to give me any sort of direction.


I gave up writing altogether for a number of years, both fiction and poetry. It wasn’t until I moved to Columbus and joined a writing group that I really got serious about it again. I read a lot more of the classics, picked up some ideas from conferences I attended and I went to readings. At one point, I was co-hosting a monthly poetry reading at one of the libraries.


It wasn’t until I attended a conference here in Columbus that I learned that speculative poetry was a viable form of the art. It was a revelation to me that I could write poetry and flash that dealt with monsters, robots and other themes I enjoy. I also love to work humor into my poetry and fiction. I find it’s an effective way of getting a message across in a sneaky way. I really hadn’t felt that comfortable trying to use humor in poetry before that. Really that conference opened up a whole new world for me.


My work has appeared in Star*Line, Kaleidotrope, Illumen, Dreams & Nightmares, The Rhysling Anthology, Ghostlight, The Book of Tentacles, Red River Review and a few others. I self-published my first collection of poetry, See No Evil, Say No Evil a few years back and it was picked up by Alliteration Ink.


You know, there are a lot of poets that I really enjoy. Some I like to read, some I really prefer to listen to when they perform their own work. But I think one of my favorites is former Poet Laureate Billy Collins. I think what I love about him is that he makes his work seem incredibly easy. When I first started writing fiction back in college, I loved Stephen King because his stories seemed so simple, so easy to write. Same goes for Collins. Their work seems so homespun and light, that I assumed I’d be able to do it immediately. Not true (in the case of King or Collins) unfortunately They both have a careful measure of what they’re doing and how each word or image will impact their reader. It’s hard work to get everyone to follow you where you want them to go. It takes work to seem that effortless.


I was introduced to Russell Edson’s work at Bowling Green’s Winter Wheat conference years ago, and I really fell in love with his style and weirdness.


Other influences? Well, I mentioned that my eyes were opened to new possibilities in poetry at a conference. I’d be remiss if I didn’t mention Mike Arnzen and Timons Esaias were the ones that gave me that shove. They both write amazing poetry, and Arnzen is the poster child for gleeful creepiness. Bruce Boston accepted my poem, Godzilla’s Better Half, for a Star*Lines prose poetry issue, and it later went on to be nominated for a Rhysling Award. He’s had an amazing career with a number of my favorite works.


Chaos. Chaos is a process, right? I suppose it is the way I do it. I take ideas and collect them in notebooks, on my cellphone, on scraps of paper, etc. and I let them kind of ferment there. They take a while to form, but one day that idea starts pushing its way out. I suddenly have to sit down and write it immediately. Many times, that piece comes out really close to how the final draft is going to look. In some ways, it’s a lot like my fiction process. I’ll write a paragraph, word for word, in my head. I’ll do it over and over so that I have each line perfectly (more or less) ready, so that when I put it into a Word document or on paper, it’s pretty much been worked and reworked. It’s a great way for me to reclaim commute or drive times. I practice some line or stanza in my head until I think it’s ready. When I finally have time to write it down, it’s well on its way to being complete.


7.      What are you most excited about with this collection in particular, i.e. what was shocking or surprising to you while you were writing it?


I really enjoyed putting Underwater Fistfight together. The pieces were written over a number of years and yet I was surprised by how some of the same themes and ideas kept cropping up in my work. And I’m always surprised by the odd places I find inspiration, you know? There are pieces that came from watching a Kids in the Hall sketch, from the unnamed townsfolk in Jaws, I wrote “Notes on Ordering a Deathbot by Mail” based on a G.I. Joe action figure, and a number of pieces were inspired by 80s cartoons. It’s not like I set out to write pieces about them, they just happen. And I think my best work comes naturally from the pop culture I’ve absorbed over the years.
Author Bio: Ohio native Matt Betts grew up on a steady diet of giant monsters, comic books, robots and horror novels. Matt’s speculative poetry and short fiction appear in numerous anthologies and journals. He is the author of the poetry collection See No Evil, Say No Evil, the steampunk novel Odd Men Out and the urban fantasy Indelible Ink. Matt lives in Columbus, Ohio with his wife and two sons. 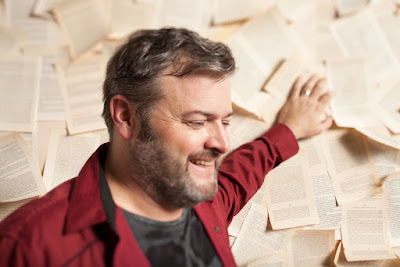