Today in the MADHOUSE, I'm chatting with Tiffany Scandal about her punk rock, feminist horror book, Shit Luck. I told myself this year that I was going to make a point to get to some of the books I've been staring at on my to-read list forever now, such as: Shit Luck by Tiffany Scandal, The Green Kangaroos by Jessica McHugh, Glue by Constance Ann Fitzgerald, and Puppet Skin by Danger Slater. I'm happy to say that I've been making good progress on my goals, and this one in particular was an absolute blast to read. I laughed. I cringed. I gasped. The story always kept me guessing, and to me, was a mixture of Nightmare on Elm Street meets Groundhog Day.

So do enjoy our chat below, and be sure to check out Shit Luck along with the many other cool projects Tiffany has on deck. You won't be regret it, and much like the character you're about to meet, I'm sure you'll keep coming back for more.

Tell us about your book. What gave you the idea to create this world, and in your opinion, what does it represent at its most literal and figurative heights?
Shit Luck is an absurd, dark comedy. It’s about a woman who is having such an awful time and then she dies, only to reawaken someplace else and forced to resume a different life. But her terrible luck follows her as she becomes of the focus and obsession of a crazed murderer. So even after death, she just can’t catch a break.

The idea for Shit Luck actually spawned from a Bizarre World Building workshop at BizarroCon (taught by Cody Goodfellow). The assignment was to outline a novella based on what happens to your main character after they die. Because my previous works have been so bleak, I wanted to try to write something on the funny side. So I sketched out an outline that was heavily inspired by Monty Python and slasher movies from the 80s. My idea was received so well, that my editor, who had heard about my assignment in the workshop, caught up with me during the con and asked me to actually write out the novella for publication.

This book is goofy, and as the story progresses, the protagonist realizes that there’s no point in being afraid of dying anymore. How fucking liberating is that? To live everyday as though it might be your last. So many people are preoccupied with fear of death, or what happens after death, that they don’t really live their life to the fullest. So just say, “fuck it,” and party.

Can you talk a little about the main character and the inspiration you used for her, as well as your decision to 1) leave her nameless and 2) write in second person point-of-view?
Oh, man. I rewrote her so many times. I went through a list of names, traits, everything. And it all felt wrong. I wasn’t having fun. So to make writing fun again, I imagined a love child between Patsy Stone and Sterling Archer. And her name being a mystery to the reader just seemed to fit. Like how fucked up is that you’re having such an awful day, and people can’t even get your name right? The second-person narrative contained the action needed to keep the story flowing. It’s easier to feel the stakes at hand because you’re imagining yourself in the shoes of the character.
What was your favorite part of the story to create and explore, and then to play devil’s advocate, what was the hardest for you? Did you find any of it cathartic to write about, and if so, in what way?

I loved creating new lives for her. Once I figured out the tone and overall arc, I was really able to go crazy with tormenting her in awful, but kind of funny ways to thicken her skin. I had the hardest time with the Heinland chapter. I rewrote that chapter so many times, and because it was a huge turning point in the protagonist’s development, I couldn’t just skip it. I nearly scrapped the entire book because I couldn’t get that chapter to work. I vented to my partner about my frustrations. We drank whiskey and talked about it, and suddenly, it made sense. I rewrote the final version of that chapter the next day.

The book itself revolves around cycles, which is something that I find fascinating as I’ve been intrigued with the concept of the uncanny and Freud’s repetition phenomena for quite some time now. In a lot of ways, Shit Luck even reads like a feminist horror version of Groundhog Day, so I have to ask, what is your favorite slasher movie? And are you excited to see Happy Death Day (October 13, Blumhouse Productions)?

I love that you said that. Thank you. I had drinks with Chuck Palahniuk and when he asked what I write, I blurted out weird feminist horror. No matter what I intend to write, the tone is always there.

Favorite slasher movie? Fuck. I can’t just pick one. Texas Chainsaw Massacre, Black Christmas, and the Nightmare on Elm Street series all have a special place in my heart.

So I had to look up Happy Death Day. I am neither hip nor with it, and I have a really poor concept of what’s new and exciting. While parts of it feel familiar, it does seem like a fun take on a slasher film. I’ll probably watch it.

As I’m sure many people will say, there’s a powerhouse scene in the book that totally rocks the table and that’s when the main character gets her period as she’s about to get intimate. The scene immediately reminded me of the prom scene in Carrie, and the part in Nightmare on Elm Street where Krueger kills Glen. What do you think this scene represents for feminist literature, and be honest, how fun was this part to write?

It’s my favorite chapter. Once I had the idea, I typed out the whole scene in less than two hours while sitting in a coffee shop. I cackled the entire time. People are so grossed out and bummed by periods, I had to write about the grossest one I could think of: The Evil Dead version of a period. The one that no person should be able to have and still be alive. For the sake of feminist literature, or just literature in general, we need normalize natural occurrences for women and not treat it like some taboo topic. The more casual and comfortable people talk and write about women pissing, shitting, burping, farting, menstruating, the less shocking chapters like this one will seem.

How would you describe your writing style to those who are new to your work?

I’m currently writing a weird crime novel about a violent gang of young women. It’s called Perdida, and it’s due out in Spring of 2018.

I’m also curating and editing an anthology for King Shot Press, titled Nasty! It’ll feature a collection of non-fiction essays from female-identified writers sharing their experiences in finding the power and courage to be who they are and do what they do. 100% of the proceeds will be donated to Planned Parenthood.

I’ll have a short story in Word Horde’s Tales From a Talking Board anthology, and Clash Media’s Tragedy Queens anthology. There’s also a novelette I’m dropping later this month as a tribute to my best friend who passed away last year.

People are welcome to follow me on social media for all the crazy updates.

Who are some of your influences in the genre? Do you have any writing rituals that you tend to follow either before/during/or after you write?

I grew up obsessing over the words from R.L. Stein, Garcia Marquez, Borges, and Plath. Carlton Mellick III got me into the Bizarro Fiction genre. My reading is all over the place, but current literary references for inspiration are Roberto Bolano, Julio Cortazar, and Violet LeVoit. I’m also heavily influenced by the works of David Lynch.

Before I write anything, I have to have a general trajectory mapped out in my head. Scenes play like visions. And if my brain is blocked, I sit in warm water and meditate. Short stories I have to write in one day, so I’ll plan for weeks until I can visualize the whole thing. If I can’t finish the story in that day, I usually end up scrapping everything I wrote and start over.

I work best late at night or early in the morning. I’ll drink so much coffee, my hands shake. I talk out loud, pace, and physically act out scenes. During times that I’m writing, I’m grateful that my partner is also a writer, so he understands what I’m doing and doesn’t think I’m (too) crazy.

When I finish a project, I treat myself to something nice. Always.

I’m currently working through Many Moons by Modern Women and Person/a by Elizabeth Ellen. I’m also reading advance copies of work from Nate Southard and Lucas Mangum. Books I have not touched yet, but hope to soon are The Sarah Book by Scott McClanahan, The Warblers by Amber Fallon, We Will Never Meet In Real Life by Samantha Irby, Caca Dolce by Chelsea Martin, Itza by Rios de la Luz, Nails by MP Johnson, and Come Home, We Love You Still by Justin Grimbol.

If you could give one piece of advice to new writers, what would it be?

Keep writing and always work to improve your craft. Also, don’t be a dick. 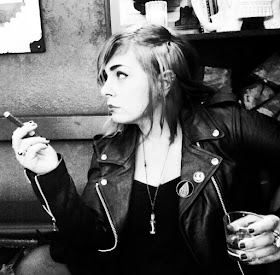 Tiffany Scandal is the author of three books. The first, THERE'S NO HAPPY ENDING, is part of the 2013/2014 New Bizarro Author Series from Eraserhead Press. Her second book, JIGSAW YOUTH (Ladybox Books, 2015), has made numerous "Best Of" lists and is available as an audiobook which the author has narrated herself. She returns to Eraserhead Press for the release of her third and newest book, titled SHIT LUCK, which is already making waves and considered to be a great introduction to the Bizarro Fiction genre. Her fiction and non-fiction have been published in Huck Magazine, Vol. 1 Brooklyn, Living Dead Magazine, The Magazine of Bizarro Fiction, and a handful of anthologies. She is also a part-time model and photographer and the products of both endeavors can be found online and in print - most noteably: Suicide Girls, Auxiliary Magazine, Rise Tattoo Magazine, and a few artbooks. She currently resides in Portland, Oregon.